I just had something happen that seems like some sort of cosmic joke. But, like one that’s actually FUNNY instead of that time I’d just recovered from a year of being sick on-and-off only to find out three months later that now I had cancer…(that was slightly less than hilarious, cosmos, please take note.)

Today, I woke up early because Sparky had an upset stomach. After I took care of him and was trying to get back to sleep, I heard the beep beep beep of a delivery person scanning packages downstairs.

Sparky was already nestled back in and snoozing, but I was restless, so I headed downstairs to investigate.

I opened the door to find two things: 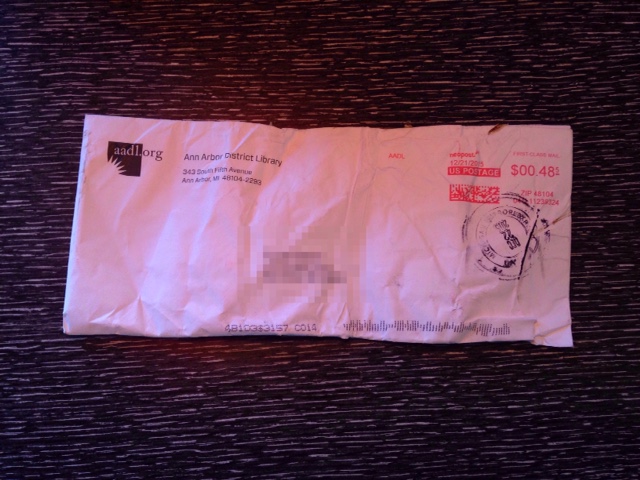 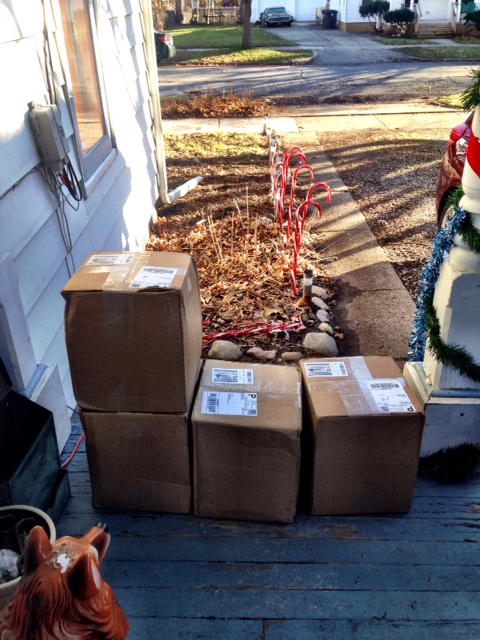 As you can see, that is a WHOLE LOT of boxes. ONE HUNDRED AND TWENTY EIGHT POUNDS of boxes, to be precise.

So, I have to leave them on the porch, but I’m bubbling over with curiosity. What is IN here?! Some amazing elaborate Christmas gift?  Who could they be from?

The labelling didn’t yield any clues.

I grab a pair of scissors and open up one of the boxes right where it sits. 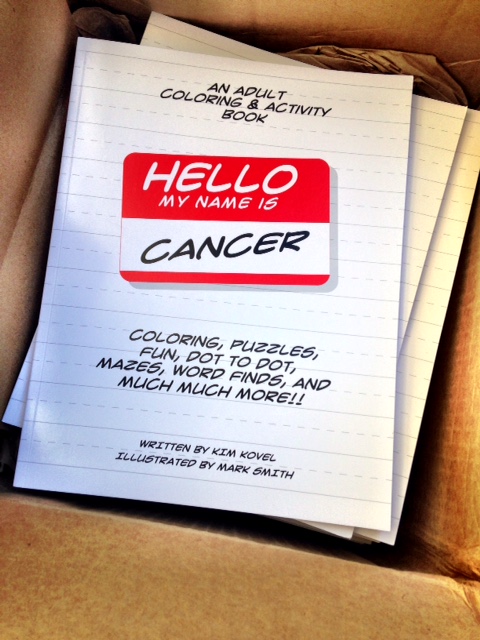 I laughed SO hard and loud.

I laughed until I cried.

Right after my diagnosis, I’d happened upon a link in a great (non-cancer-y) online group of women that I’m in. One of the members had heard about this coloring book project, and having just been super-thankful for U of M’s own version of a coloring book, I was curious.

I sent a super quick note to the creators, saying I thought the book was a cool idea, and that it was refreshing to see such a potentially overwhelming experience handled in such a way.

Since I’d missed the Kickstarter, I wondered if there still might be a way to purchase a copy or two to check it out and maybe share with a couple folks locally that might appreciate it. They generously said, don’t worry — we’re happy to send you a few for free.

I thought I few would be like five. Maybe six.

Is this some sort of lesson? Some kind of symbolism? What the hell am I supposed to take from this? Is this me-trying-to-help-others ending up as a huge wall or burden, in super heavy physical form? Is it me having to accept help (in moving the boxes, in distributing the coloring books)?

I’m choosing not to think of it in any one specific symbolic way, but still take it as a hilarious result of good intentions gone awry with bad record keeping/shipping info.

And I hope to gawd I can find good contacts who will appreciate these books without too much hassle! I won’t let them go to waste… that much I know. I plan to contact Gifts of Art, the CSC, the local chapters of YSC and Gilda’s Club and a few other organizations after the holidays.

And hey — at least I got a good hearty five minutes of laughter out of the whole thing. Heck, I’m still laughing as I write this. 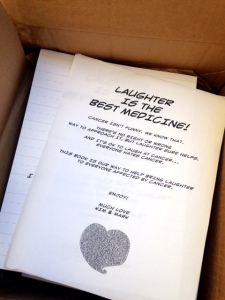